These cards are a meditation on Western values. Partly a response to a growing awareness of my own fast disappearing memories of childhood and partly a recognition that George Bush is of the same generation as myself. I suspect his long standing immersion in the Western myth has shaped his unconscious. It has probably shaped mine too, but I was never given access to weapons of such destruction. 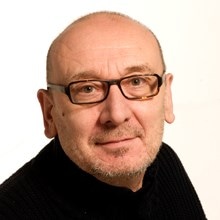 Garry Barker is an artist who draws narratives about the fact he finds the world he lives in a very strange place. He is also getting older and worries a lot about what it is he does.